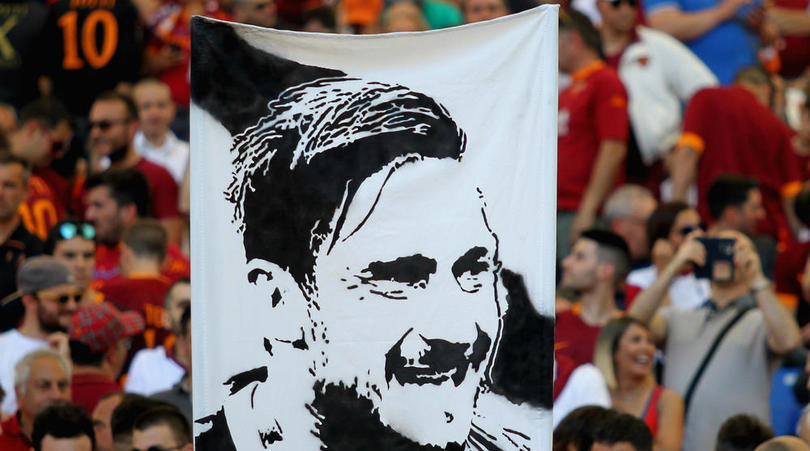 When the Mediterranean sun shines down to Stadio Olympico. The match between AS Roma and Genoa will be more special than ever. Please to remember on this day – 28/5/2017, because Francesco Totti played the final game that day, ending a quarter of a century of dedication to AS Roma. On March 28, 1993, Francesco Totti made his first appearance. At that time, the boy was as beautiful as dawn, rich in life and many dreams. Today, he was like the sun shining down, shaking one last time, dazzling to the tears of every tifosi.

The Stadio Olympico crowded many the audience, in the stands, the banners were spread out grateful gratitude for Totti. And in the sky, a plane was flying across the “Grazie Capitano” (Thanks, captain). The first five minutes of the match, Totti was on the bench for three minutes. He drank water, he frowned, he was silent, he turned to tell his teammates, between deep blue eyes, bearded silver hairy 40s, his eyes wet. When he put on his bib, walked on the pitch and waved his hands up to the audience, it was a dumb image. The bib represents the bench, waving, and Romanista tears. History as if wanting to wait to wait Totti a bit more.
Fabio Capello once compared Totti to a Picasso painting. Trapattoni calls him a work of Van Gogh. What do you understand about this? If the two famous coaches are pragmatic and defensive use of the masterpieces of the two most famous artists of the century compared to Totti, it means that the beauty of Totti is beyond the reach of the Italian pebble. Right, from face to rock, and talented style and unbelievable heels, he is the last “trequartista” of Italy.
But beauty is not enough for Totti to dominate. All will be surprised to know that in Euro 2000. Before making his shot in the semi-final against the Netherlands, Totti went past Luigi di Biagio and Paolo Maldini, then smiled smiles. To him, “I’m going to hit this ball.” The 24-year-old was first featured in a major tournament in the semifinals of his life, Gun battle “to where. The smile was soft and the message was frightening, as if announcing death. And Totti kicked the panenka over Van der Sar, who celebrated with a fistful of hands and a bright smile in front of everything.
Francesco Totti, besides beauty is personality, strength, cruelty. Totti is not gentle, therefore, he was born to be the emperor of a team.
Clips back to the image of farewell day. 54 minutes, Totti in the yard, the audience shouted excited. The director caught two very expensive images of an old man and a kid, both of whom tear the tears. Alas, Roma is Totti, Totti is Roma, the generation from old to young love Totti. Farewell to Totti, it is cut off half of the soul of this team. 11 years ago, when Totti became a world champion, a little boy painted “Totti” on his cheek. After the match tonight, the images will become a resonance and never repeat.
As the referee whistled, Roma beat Genoa 3-2 in the race to chase the score. In the old days, Totti had cucchiaio (“scoop”) from a staggering 20m distance to all, who won the European Golden Boot over the age of 31 in the “virtual 9” chart. Today, he has no goals, no cucchiaio. The last time, to know that Totti was too bad, unfinished as numbers surrounded him. People are waiting for 9,000 days and 900 games for Roma. But no, fairy is real. Although prayed inside the Vatican, all the Romaistas expected it to come to him, to compensate for what was most beautiful of the youth Totti had given to AS Roma. Talent is the same, in exchange for only one Scudetto and how many times they finished to the 2nd place.
But the emotions that the match brings, in the air, and the screams of his name at the Olympics are enough. Totti not scored, all still love him as early childhood. He stepped out, holding a medal in the middle of the pitch, a 10x10s shirt with a horizontal line, many teammates crying, his two children crying, Totti crying and thousands of spectators at the Olympics. Wailing tears to him, shouting his name. Tears are the proof of the greatest sentiment. What farewell more touching?
In the day when Roma won the Scudetto in 2001, Totti tattooed his Gladiator arm – a symbol of the Roman power of the ancient Roman world. For the past 25 years, the ethereal capital of the capital, Francesco Totti, has been the team’s “gladiator”, fighting between blood and sand, protecting the color of the shirt, until his knees and legs are tired. His passion is still burning.

The light on the King Power Stadium

Ramsey’s remove and and the legacy and Arsenal have left

Italy CB – Lose the pompous, but the hard substance of the still

Totti on the farewell day – Simply that love is no reason!